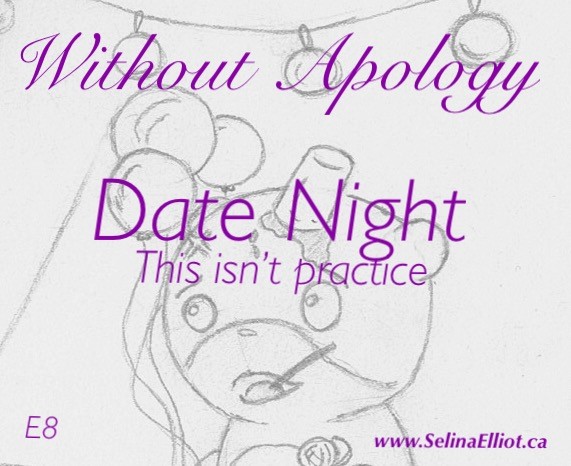 “Will you teach me how to serve?” Kuro rolled his head back on Dasai’s chest. They were on the couch, Kuro nestled in Dasai’s arms. Kuro was running his fingers lazily over Dasai’s hand.

“Volleyball?” he was caught off guard by the question.

“Watch it,” he warned with a grin of his own.

Dasai started with taking Kuro’s arm in his hands. He ran his fingers up to the inside of the wrist, “it’s all about where the impact happens.”

A shiver ran over Kuro.

The doorbell sounded out bringing an end to their moment. Dasai glared.

His mom’s unexpected voice had them both looking up towards the kitchen, “that is unfortunate timing. I was hoping to get another photo of the two of you. You’re just too sweet!”

“And the moment is dead,” Dasai followed Kuro in sitting up.

“I’ll answer the door,” she sighed.

“What do you mean, another photo?” Dasai thought to question. His mother’s smile was merciless.

“I forgot about supper,” Kuro jumped up! “We invited Emmett and Darcy over.”

Kuro was frozen in panic over something that didn’t matter. Anger ground his teeth together.

But his mom stepped in, “come on, Kuro. We’ll go put something together. Dasai can let your friends in.”

His mom laughed, “nothing to apologize for. Come on, lets get to work.”

She led Kuro into the kitchen. Dasai was tempted not to answer the door, but since the moment was long gone, he complied. The door opened just as he was walking away without a greeting. Emmett and Darcy moved in as though they expected this.

“Wow, Dasai your place is so amazingly perfect!” Darcy was looking about in wonder. “Why haven’t you ever invited us over before?”

“I didn’t invite you now,” he reminded as he walked back into the living room.

Emmett chuckled, “it’s because he’s been hiding a certain cutie from us. But now that the cat’s out of the bag…”

It threw Emmett off. He cast a questioning look to Darcy, who could only shrug uncertainly.

“Where is Kuro?” Darcy followed Dasai to the couch.

“He’s in the kitchen making your food,” Dasai claimed his spot on the couch. His eyes were on the television.

“Are these Kuro’s grades?” Emmett snatched up the envelope before grabbing the armchair. He didn’t even hesitate to rip into it.

“Emmett, that isn’t yours,” Darcy made a grab for it that failed.

Until Darcy moved to claim a spot. Then his leg extended out preventing her from taking Kuro’s place. Easily he ignored the way she pouted about it.

Emmett was scanning the documents, “holy cow, that kid is smart! Seriously Darcy, he’s smarter than you.”

Emmett handed over the papers. She hesitated on principle before caving to curiosity. Her eyes grew wide as she read. “Wow, he really is a straight A student! How did you do, Dasai?”

When she moved to reach for the envelope with Dasai’s name on it, his foot moved from the couch to the coffee table. She would have to remove his foot in order to find out. He continued to watch the television.

“How about you, Emmett,” she sat back, giving up.

“There isn’t much time left at school,” she was addressing them both. “If your grades don’t improve, you’ll find it hard to go to university.”

“Big assumption I even care,” Dasai pointed out lethargically. His leg was back in Kuro’s spot.

“You should care,” she pressed with a note of peevishness. “Kuro’s probably going to follow you, so shouldn’t you try to get into a university that he would want?”

He snarled, “why the hell would I do that? I have no interest in university or the debt. He can do whatever he wants.”

“Kuro’s going to do whatever makes other people happy. Even if it’s at the expense of himself or his future. Don’t you think you should be considering that?”

“Don’t be a drama queen,” Emmett sighed heavily. “Kuro hasn’t even said what he wants to do.”

“Exactly my point. He hasn’t said anything. He won’t talk about stuff unless we do, and then he’ll only go along with what we say because he thinks it’ll make us happy. What if Kuro doesn’t go to university because Dasai doesn’t? Or, what if Kuro isn’t even gay but he goes along with it to make you two happy?” she tossed the doubt out there in a desperate attempt.

“WHAT?” both Dasai and Emmett questioned this.

“I’m sure things are confusing for him right now.” She shrugged coldly, “and just because he goes along with things, doesn’t really mean anything with Kuro. That’s all I’m saying.”

“First off,” Emmett sounded frustrated, “there’s a whole rainbow for a reason. Secondly…”

But the second point remained silent for Kuro and Dasai’s mom entered the room. They carried trays of food and drink.

“We have some light snacks and drinks while supper is cooking,” Dasai’s mom beamed with pleasure! “It’s so nice to finally meet Dasai and Kuro’s friends. Welcome to our home.”

Kuro glanced at Dasai, expecting him to make a comment. But Dasai was lost in dark thoughts.

“It’s nice to meet you,” Darcy stood up.

But she was waved back down, “I won’t be staying. I have to be running.”

“Parents night out, actually,” the look she gave Kuro held meaning. “With some coworkers who are single parents too.”

She gave Kuro a light kiss on the side of his head. Her hand ran through Dasai’s hair affectionately. He brushed the touch away.

“Have fun kids. Call me if you need anything.”

“Bye,” there was a chorus of three voices seeing her off. She picked up her purse, slipped on her shoes, and with one final wave she was gone.

“Kuro, this…is great, thank you!” Darcy was trying to be diplomatic.

Dasai snickered, “he forgot you were coming.”

“Dasai!” Kuro was flush with embarrassment.

“You’d rather them think you actually suck at cooking after all the hype?” he was cruel.

“It doesn’t matter…” his words trailed off because of the warning that was in Dasai’s gaze. Kuro silently sulked, keeping the rest of that thought quiet. He claimed the seat on the sectional next to Dasai.

“So,” Emmett sounded almost as cruel, “you two dating yet?”

“I’ll check on the food,” Kuro moved to stand.

Dasai’s leg prevented him from going anywhere, “you caused this. Stay and deal with it.”

Kuro pushed at the leg, but he wasn’t moving Dasai. An amused grin surfaced when Kuro gave in.

“Did I do something wrong?” the question came out because he couldn’t hold it in. The two of them were cleaning up after the others had left.

Dasai stared. Thoughts raced in his mind, yet came out as a narrowed focus upon Kuro. He took a hold of Kuro’s arm, “sit down.”

Kuro did as told.

“You always do as your told, don’t you?” he sat in front of Kuro on the couch.

When his gaze fell, it gave him away. Standing up to others was more than he wanted to face.

“Tell me what you want.”

Immediately, Kuro was shaking his head, “I don’t…know what you mean.”

Dasai breathed slowly before responding, “I mean, we spend all our time together now, we kiss a lot, we make out, we have this dynamic building between us, I spend my time coming to your rescue.”

“But those are things I want. What do you want?”

Hearing those words had Kuro’s heart pounding. All he could do was shake his head.

“I’m too scared to ask for what I want,” carefully he looked up at Dasai from lowered eyes. His hands were shaking.

The look cast his direction said a lot, as though Kuro was affirming Dasai’s fears.

Fearful of the conversation ending on this sour note, Kuro hurriedly added, “I want to ask. I really do. I-if I could, I would ask for everything we do.”

“How do I know that you’re not just saying what I want to hear? That’s what you do; tell people what they want to hear so that you don’t have to deal with their ugly emotions.”

When Kuro didn’t answer, Dasai got up. Kuro reached out, but he was leaving and it would take more than a half-hearted gesture to get him back. He watched with sadness as Dasai walked away.

“It’s not that I can’t deal with them.” Tears fell from his eyes choking the next words to come out, “I just don’t want anyone to feel like I do.”

The words stopped Dasai at the oversized opening to the living room.

“I don’t know how to act like s-someone who’s worth something,” Kuro wiped his sleeve across his eyes, “but I’ll try to. Because I don’t want you to think that we’re doing anything that I don’t like.”

“You haven’t said what it is you do like,” he accused. His fist lightly hit the frame. A moment passed and then he turned to look at Kuro, “get ready. We’re headed out.”

“A da…but why?” Kuro was completely dazed.

“Moving,” Kuro hurried to grab his wallet and shoes.